I love using my Crockpot.  Nothing like throwing everything in it in the morning and leaving it alone until it's time to eat.  Plus, you get the yummy aroma throughout your home.  I went with a soup last night, because it was a yucky RAINY day.  I can't believe it rained that much in January.  I still want snow!!!  O'well.  The soup turned out great, and it would have been even more great if I wouldn't have been so lazy and baked up some rolls.  Add or take out what you want in this soup.  Change up the meat and veggies.  It will still be delicious. 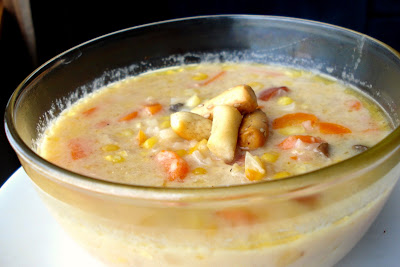 
2 1/2 cups milk
1 (14.75 ounce) can cream-style corn
1 (10.75 ounce) can condensed cream of mushroom soup, undiluted
1 3/4 cups frozen corn
2 cup frozen shredded hash brown potatoes, or if you want throw in some cubed up potatoes, again, I was feeling lazy.  :o)
1 cup cubed fully cooked ham
1 large onion, chopped
1 heaping cup chopped carrots
2 tablespoons butter
salt and pepper to taste
Throw all the ingredients in your crockpot.  Mix it up good, throw the lid on and let it cook on low for about 6 hours.
Have a fabulous week and cross those fingers that I get to meet our new baby boy soon.  :o)
Source: Allrecipes
Posted by Erica at 8:16 AM

Email ThisBlogThis!Share to TwitterShare to FacebookShare to Pinterest
Labels: soup