I remember the first time I tried Hummus.  It was in the Liffy's family kitchen with tortilla chips.  I had never had ANYTHING so delicious.  I think I ate a butt load, and then was embarrased afterwards for eating too much. :o)  I think my sister got that batch from Costco.  Ever since then, whenever anyone goes to Costco, I have them get me some Hummus.  Well...no one has gotten any for me in a loooooong time, so I thought I would make some on my own.  I'm happy I found an easy enough recipe to hurry and whip up.  It was pretty dang good.  And if I rememeber right, then I think it might beat the Costco kind.  I need to do a comparison, so if anyone is going to Costco, make sure to bring me some home to compare.  The first batch I made, I added too much garlic.  I was burping garlic for a week.  Yum!  Let's just say I didn't get too many kisses from the hubs.  He's not a fan of garlic.  *lol*  The next time I made it, I didn't add as much and it turned out perfectly.  If you are not too into the garlicky flavor then don't add as much. 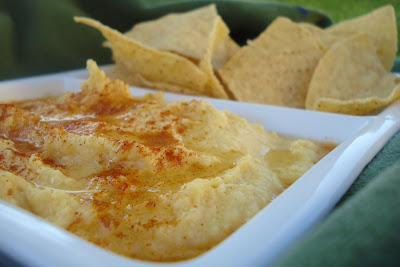 In a food processor add your beans, garlic, lemon juice, cumin, olive oil and 3 Tbsp of water.  Process ingredients until a nice puree.  If it's too thick then add more water a Tbsp at a time until it's the right consistency.  I only added the 3 Tbsp to mine.  Taste it and then add salt if you'd like to.  Process again.  Put into a serving dish and drizzle olive oil over top and sprinkle some paprika over it.  Serve with tortilla chips, veggies, or cut up pitas.  DELISH!  :o)

Have a great week!!!

Source-Food and Whine
Posted by Erica at 8:53 AM

Email ThisBlogThis!Share to TwitterShare to FacebookShare to Pinterest
Labels: appetizer